MUSKEGON – The Colorado Inferno came to town with a lot to play for.

After competing in seven games this season, the team was fighting for a playoff spot in the Major Arena Soccer League 2 with the regular season winding down.

The visitors might have been counting on a much-needed victory against the host Muskegon Risers, who were only playing their third game of their non-league season.

But the Risers had lots of motivation, as well. This was their third and final game of an abbreviated season, which means it was their playoffs and their championship game, all rolled into one. While other teams battle for the MASL 2 title, the Risers will be home until next season.

That’s why the Risers left it all on the field, and thrilled their fans by rallying from a pair of two-goal deficits and pulling out a thrilling 10-9 victory over Colorado on Saturday in front of a screaming crowd at Mercy Health Arena. 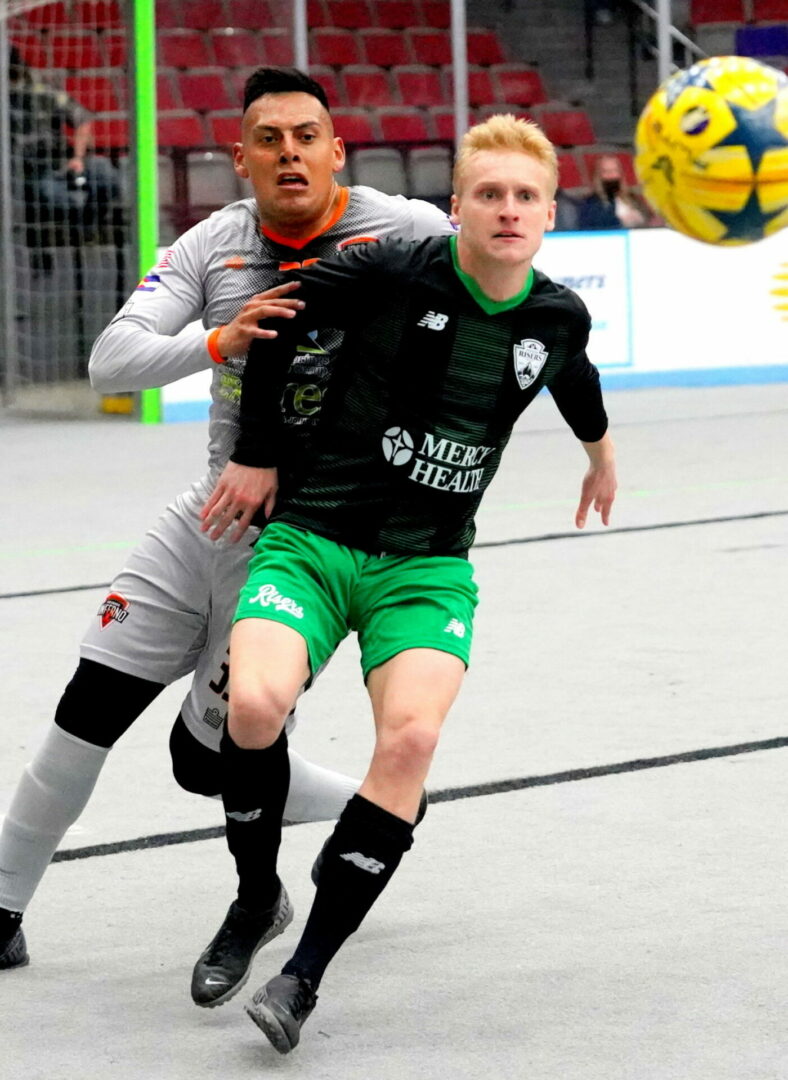 The winning goal came from Marcel Berry, who found the net with a little under five minutes left in the game, less than a minute after Colorado had tied the score at 9-9.

The Risers finished their short season with a 2-1 record. Colorado limped home with a 3-5 record and a dent in its playoff hopes.

“I just can’t say enough about my players,” said Risers Coach Ben Ritsema. “They don’t quit, they keep grinding. We had a lot of adversity in that game. We had a lot of hills and a lot of valleys. It’s great that we ended up on top of the hill at the end of the game. I am really proud of my players. 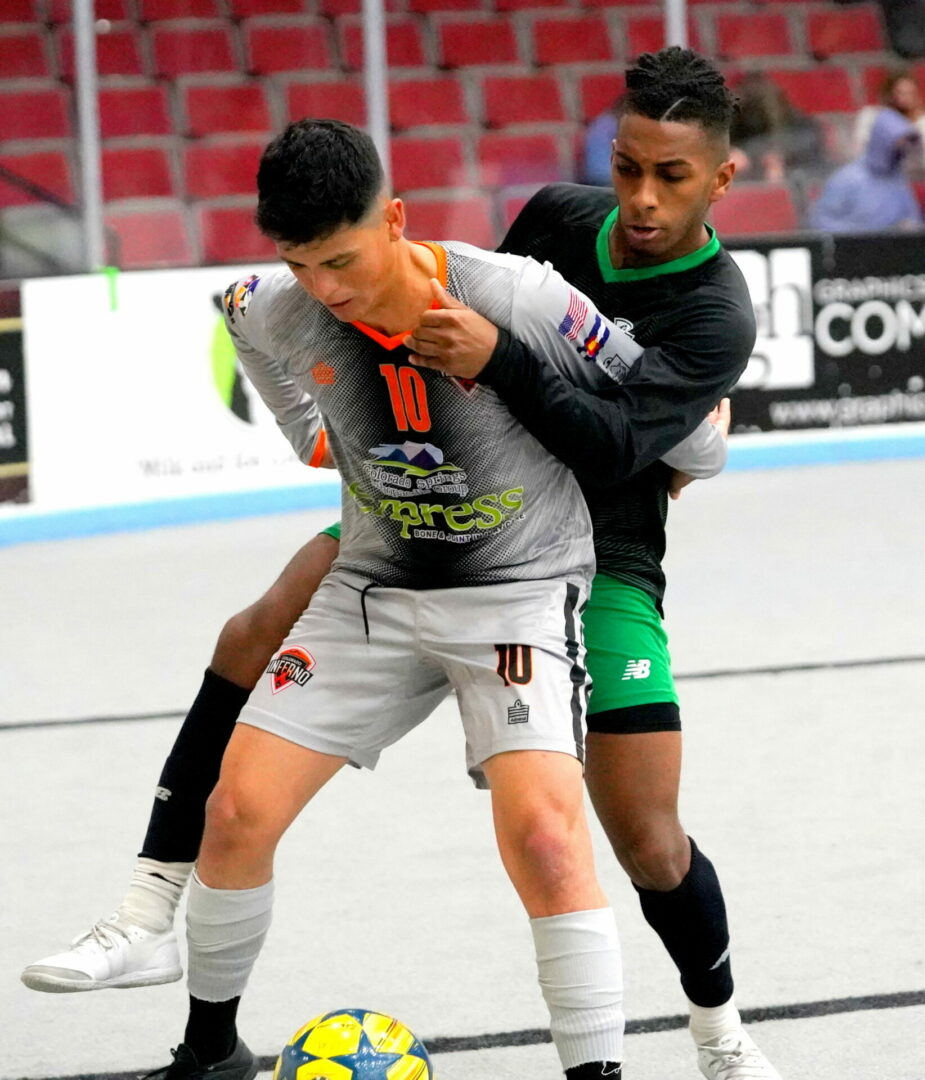 Moses Crawford tries to get to the ball for Muskegon. Photo/Leo Valdez

The scoring hero of the contest was Miguel Flores, who scored a three-goal hat trick in the first half. Flores, a Muskegon High School graduate who is a veteran of Risers indoor and outdoor seasons, said the team wanted to leave the fans with a victory.

That was particularly important because the Risers men’s team will not be playing this summer, for the second straight year. The Risers women’s team will have a summer season, beginning next month.

“I think there was a lot of character showed tonight, with all we have been through with COVID and barely having a season,” said Flores, who finished the campaign with a team-leading eight goals. “We were counted out and down, and we wanted to overcome those obstacles. We wanted to keep playing and we got ourselves a win.

“It goes back to the fans. They come and watch these games and they want us to perform. We just want to give it our all, and that’s all it was today. We have guys that are going back home to Rochester and Virginia. We wanted to leave on a good note, and make the fans happy. We feel happy. At the end of the day it was a win-win for us, and it took everything.”

The victory capped a short but successful season for the indoor Risers, who last played in 2019 and posted a 1-11 record in their first season as a member of the MASL 2. They didn’t play last year due to COVID, and decided not to play a full league schedule this season due to travel costs and continued concerns over the pandemic.

Before Saturday the Risers beat Fort Wayne 7-5 in their season opener, then lost 7-5 to a very good Cleveland squad after leading after three quarters. 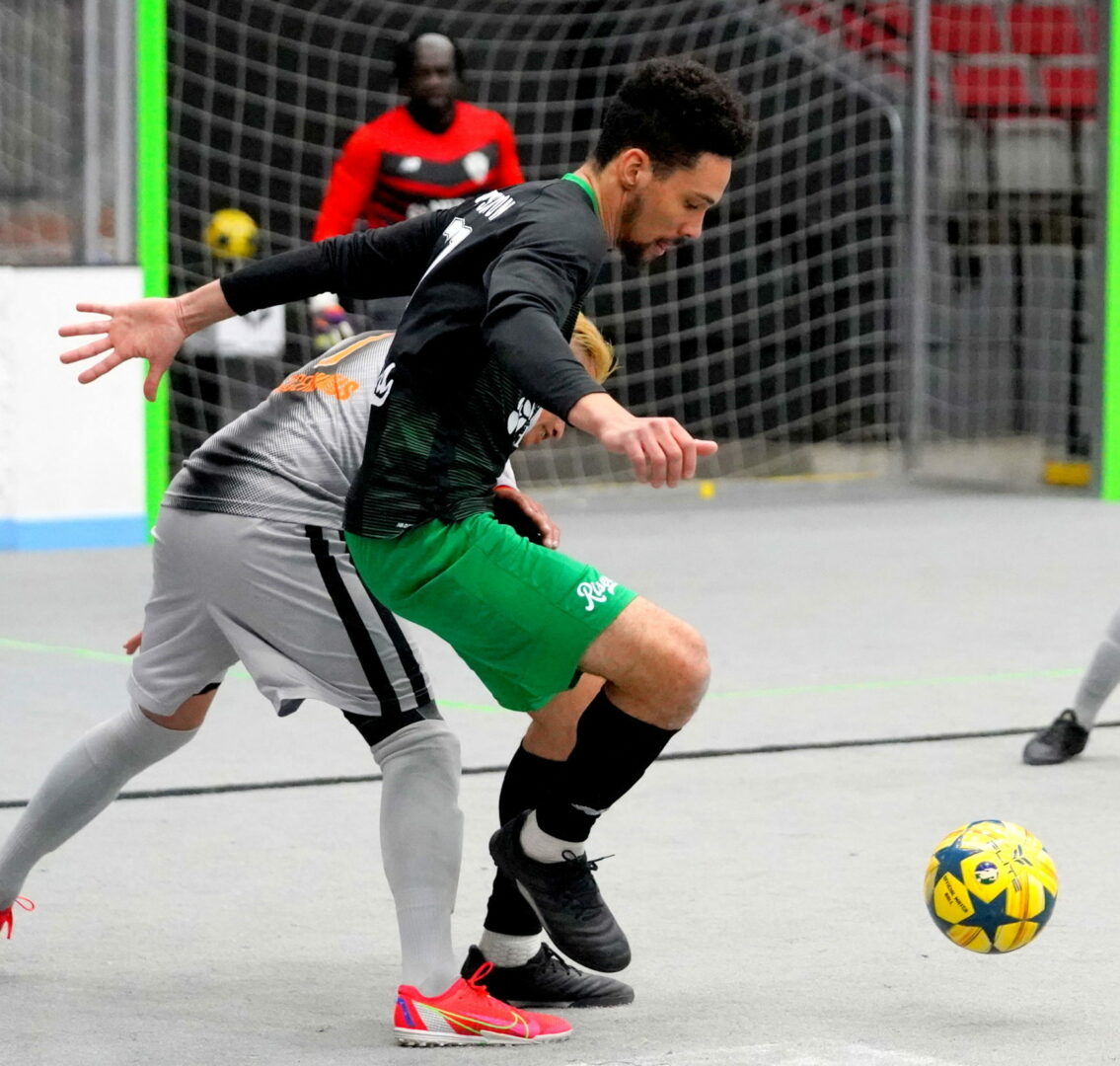 Greg Williams looks down at a bouncing ball near the Muskegon goal. Photo/Leo Valdez

“You can have really good players, but you can see how many times we used the wall today, and how many times we knew what to do on a power play, and what to do on the penalty kill. Just all of the little stuff, how to shift quicker, all that stuff. It doesn’t happen in a year, it happens over several years. We seeing the fruition of all that work.”

The game did not start out promising for the Risers. 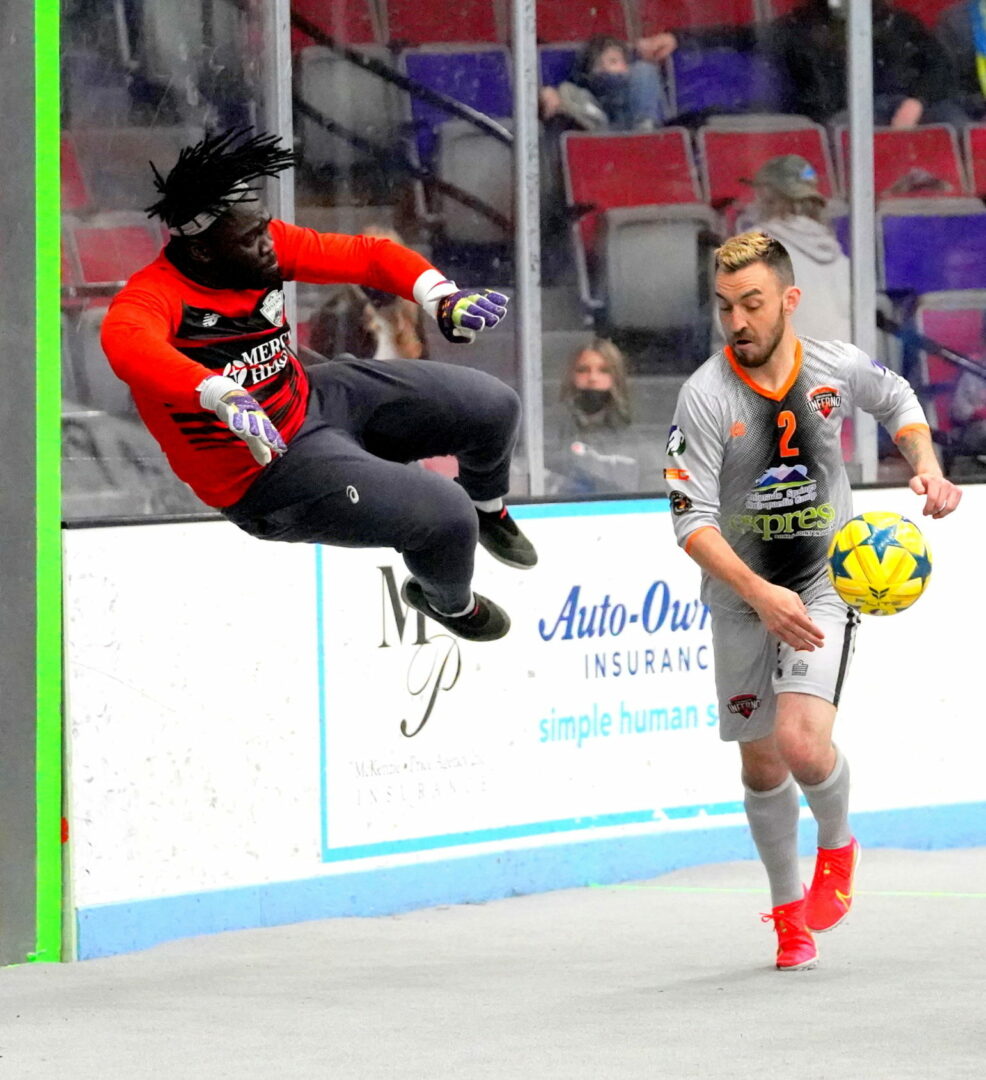 Colorado jumped out a quick 2-0 lead in the first 6:44, with goals from Josue Jiminez and Raul Elias.

But the Risers regrouped and tied things up, with goals from Colin O’Keefe (fifth of the season) at 9:09 and Flores at 11:53.

Muskegon goalie William Banahene made two great leaping saves within a few seconds in the dying seconds of the quarter, and the game was tied 2-2 after onejust .

The teams exchanged goals in the second quarter. Robert Williamson chipped in a loose ball at the 2:59 mark, giving the Risers a 3-2 lead. Colorado’s Jorge Valasquez tied the game again with a goal less than a minute later.

Flores finished off his hat trick with a goal just seven seconds later, and celebrated with back flips on his way back to the bench. Muskegon led 5-4 at halftime. 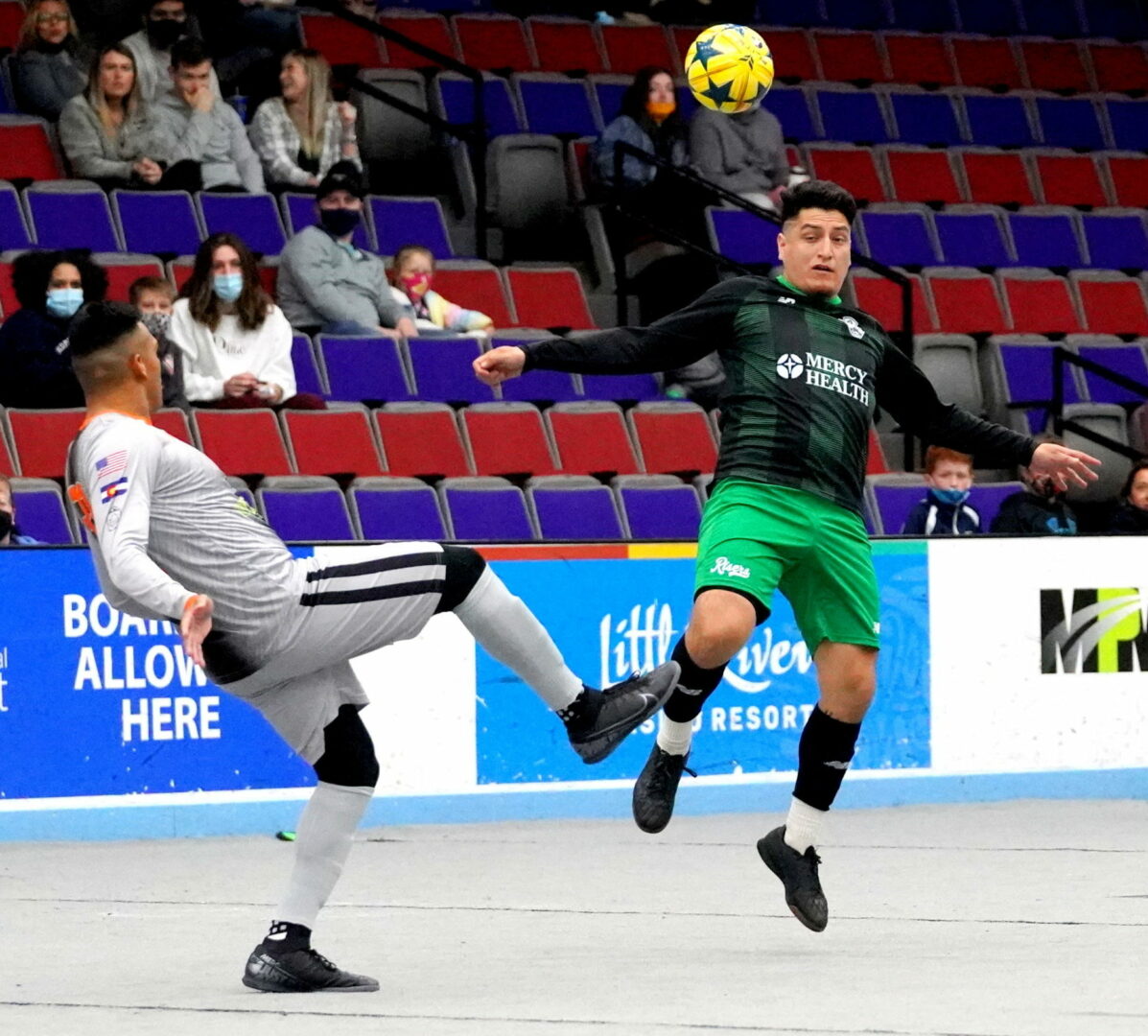 Aldony Mendez ties to get in front of the ball for Muskegon. Photo/Leo Valdez

The third quarter went very badly for Muskegon, which was outscored 4-1 and trailed 8-6 headed into the fourth. Colorado got goals from Jack Reynolds, Francisco Rivas, a power-play goal from Jacobs, then another goal from Rivas. The Risers’ lone tally came from Aldony Mendez.

But the Risers roared back yet again, outshooting the Inferno 9-3 in the fourth quarter, and outscoring them 4-1 to steal the victory.

Elmedin Zukic scored for Muskegon at the 3:58 mark to pull the Risers within one. TJ Ifaturati, another Risers veteran who was playing his first game on the season, scored less than a minute later, knotting things up at 8-8. 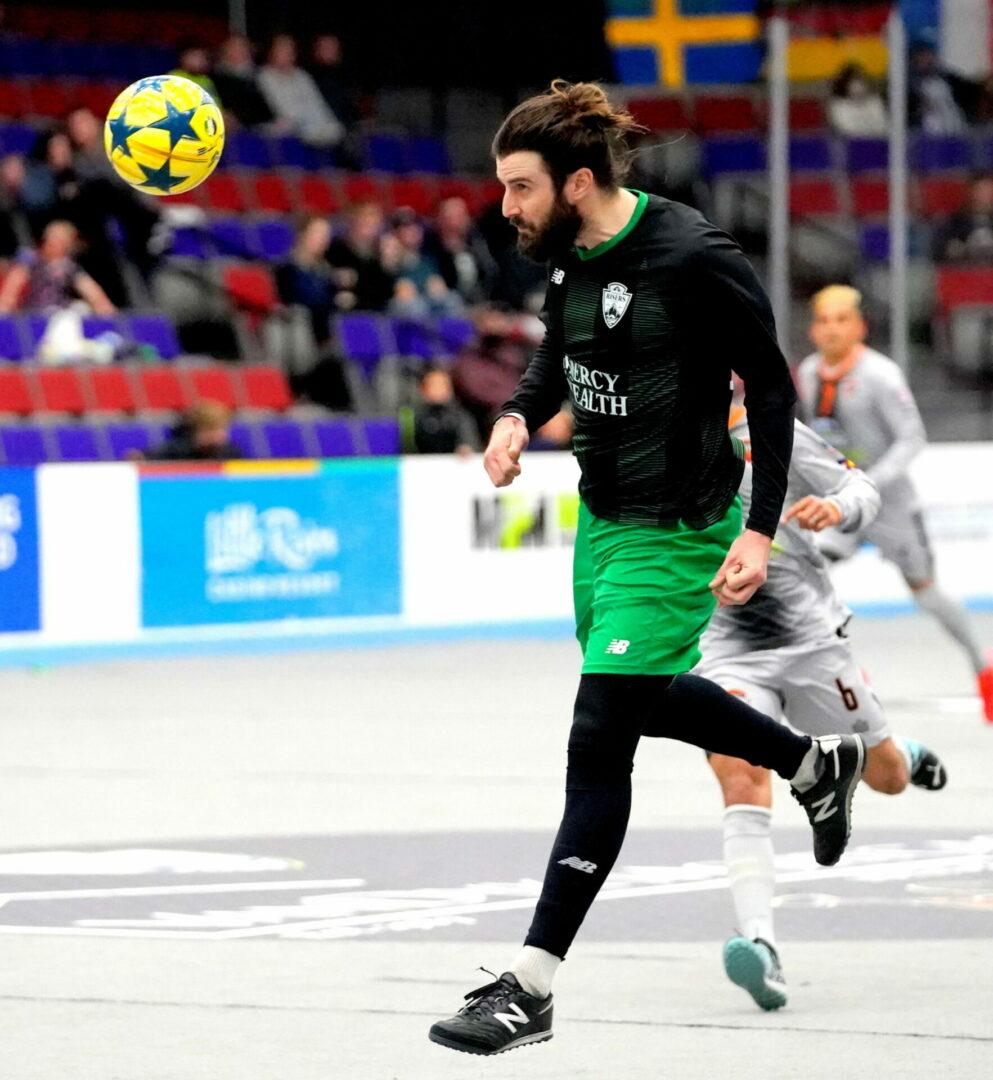 Mendez scored his second goal at the 6:45 mark, giving the Risers a 9-8 lead.

Muskegon had a golden opportunity to put the game away when two Colorado players were sent to the penalty box  with back-to-back blue cards, leaving the Risers with a two-man advantage for 32 seconds. The Inferno wrecked that chance when Ismael Morales managed to score in the extremely shorthanded situation, tying the game at 9-9 at the 9:36 mark.

But Berry settled the issue with his goal less than a minute later, and the Risers held on for the win,.

“I just looked at them and said we have 15 minutes left in our season, we need to get behind the ball and play good team defense,” Ritsema said, when asked what he said to his team after the bad third quarter. “We need to take chances, and we need to work harder than them. If we work harder than them, then we have a chance to win it. We did outwork that team in the fourth quarter.”

You Are Invited to Our Marriage ceremony. Kindly Explain to Us Your Vaccination Position.

‘I have peace of mind’

Remarks by President Biden in Honor of Labor Unions

Go get your own car